I was in Providence, Rhode Island for the 69th annual 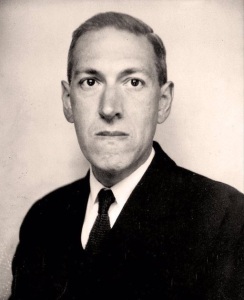 Evangelical Theological Society conference last week, and what better to blog about than Providence’s famous writer of the fantastic, H.P. Lovecraft? Less well-known than fellow Providence horror writer Edgar Allen Poe, Lovecraft’s horror and sci-fi influence is felt anywhere puny humans battle against tentacled and incomprehensible monstrosities from space, or where a hapless student opens up a forbidden tome of knowledge titled “Necronomicon.” Lovecraft lived in Providence for virtually his entire life, and associated his own existence so closely with the place that his tombstone reads, “I AM PROVIDENCE.”

This post won’t attempt to give a biography of Lovecraft or to grapple with the very real problems his work leaves us (racism, misanthropy, nihilism), just to pick out a couple of Lovecraftian themes and tease them out theologically. The key question is: why is Lovecraft’s horror effective? Why are we scared of things like tentacles and chitin and amorphous blobs and nameless things of that nature?
To me, Lovecraft’s horror works because he finds his enemy, his horror, not in death or the supernatural but in life and in the universe itself, and he’s scared that the order and beauty we see in the world could actually just be a thin veneer over something much more chaotic and meaningless. We can see this even in his use of shapelessness or ineffability. It’s the breakdown of matter and of language. Even geometry can kill you. 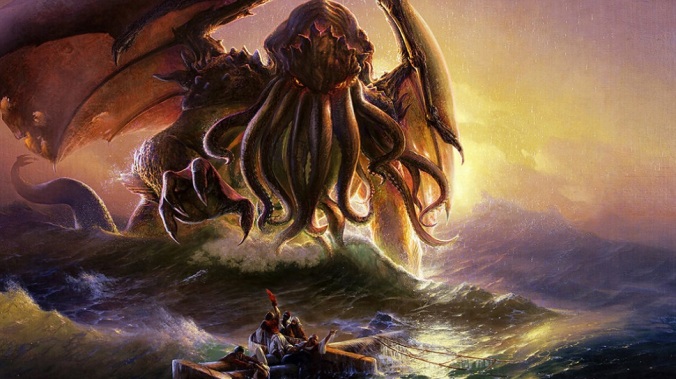 His material consists of hillbillies and backwards degenerate people inbreeding with fish monsters. This is all a breakdown of created order. Lovecraft finds horror in this because, of course, he is a “civilized” man: he loves literature and classics from prior periods of history before the advent of “modern science” and the looming fear of meaninglessness. We see, for example, that he talks about how if he were alive during the American Revolution he would be a crown loyalist. He’s subconsciously longing for days in which there was a definite order and structure to society, and his horror stems from the dark suspicion that there may actually be no order and meaning to creation. He doesn’t have a doctrine of creation. The world, the universe, is the enemy.

There is a sort of unholy trinity in Lovecraft: Azathoth, Shub-Niggurath, Yog-Sothoth. Azathoth is power or energy; Yog-Sothoth is time and knowledge; Shub-Niggurath is creation and life and matter. Lovecraft twists all of these ideas into something horrific. These beings are, in a way, the personifications of different aspects of Lovecraft’s cosmology. Since he has no transcendent God, his divine stand-ins are elements in the world apotheosized: unthinkably powerful forces or alien consciousnesses.

Azathoth, the blind idiot god at the center of the universe, represents primordial matter and energy. Energy here is not exactly wholesome. Rather than a source of vitality and renewal, it’s something more like a nuclear bomb going off. Matter here is, as Aristotle says, shapeless and formless, such that without the imposition of structure, it’s dangerous and primeval chaos.

Neither is the knowledge represented by Yog-Sothoth a good thing, because as the first line in “The Call of Cthulhu” points out, only “the inability of the human mind to correlate all its contents” keeps us from going insane. Knowledge is something that brings destruction and consciousness of the futility and terror of existence.

Creation, too, is subverted. Nothing pure gets created in a Lovecraft story. There are only monsters and madness. The paradigm for this is Shub-Niggurath, the Black Goat of the Woods with a Thousand Young. Whereas traditionally we see life as a source of beauty and something to be cherished, Lovecraft portrays it instead as a “loathsome fecundity,” a cancer that spreads and bubbles out into swarms of teeth and claws and eyeballs and fleshy tumors. Life for him is a teratoma. So Lovecraft sees even the fundamental building blocks of the universe as fundamentally horrific.

If you’re in the frame of mind of an H.P. Lovecraft, you can look outside and, instead of seeing a tree as a tree, see it as some sort of malformed fungus-like entity clawing upwards towards the sky The beauty of everything is absolutely robbed and twisted into a sort of meaningless chaotic growth. So beauty and order and time and language and meaning are all distorted and shown to be nihilistic.

In contrast to Lovecraft, there are Chesterton, Lewis, and Tolkien, who emphasize the simplicity and naturalness of the Good.

Again, why are things like fungi and invertebrates scary to us? I think this horror of degeneracy and of primitive things contains an implicit judgment to the effect that there is a created structure and a hierarchy to the universe, and the horror comes at points where that order is threatened or breaks down. It’s not bad to be a pig and ignorant, it’s bad to be Socrates and ignorant. Likewise, it’s not horrific to be a crustacean, but if you’re a human being that turns into a monstrous vermin, then you have a problem.
Even if, instead, we assert that the issue is the revelation of alien forms of order antithetical or repulsive or indifferent to human standards, demonstrating the relativity of our concepts of good and evil, it remains the fact that human beings share such standards. This is what C.S. Lewis points out:

A wish may lead to false beliefs, granted. But what does the existence of the wish suggest? At one time I was much impressed by Arnold’s line, “Nor does the being hungry prove that we have bread.” But surely, tho’ it doesn’t prove that one particular man will get food, it does prove that there is such a thing as food! i.e. if we were a species that didn’t normally eat, weren’t designed to eat, would we feel hungry? You say the materialist universe is “ugly.” I wonder how you discovered that! If you are really a product of a materialistic universe, how is it that you don’t feel at home there? Do fish complain of the sea for being wet? Of if they did, would that fact itself not strongly suggest that they had not always been, or would not always be, purely aquatic creatures?

If this is right, then the the whole premise of Lovecraft’s horror actually rests upon the necessity of an instinctual structure to the universe. Lewis notes that a fish doesn’t know it’s in water, and the person that sins doesn’t know they’re in sin. And so a person completely lacking in moral intuitions about an ordered universe would not find these things horrifying. The argument may not be airtight, but it’s certainly suggestive.

While most “traditional evils” can be scary, moral irrationality is actually scarier. Nihilism doesn’t rest content with evil, but also takes away the goodness of good. Lovecraft’s heroes are ordinary people fighting against the darkness even though they know it to be hopeless. They know their resistance is ultimately going to be futile and meaningless. Even the good is reduced to nothingness. I think that’s a unique terror of the modern age: the threat of meaninglessness even in our good actions. Everything is going to be destroyed in the heat death of the universe anyway, and if the ultimate forces that shape our universe are actually chaotic and drive human beings to madness then it’s not just that the heroes fight against evil, it’s that they’re fighting against evil with nothing to fight for. Goodness is also destroyed.

This can sometimes backfire. In Lewis’ That Hideous Strength,  Mark Studdock’s experience in the “Objective Room” (a conditioning program meant to reveal that moral values are subjective) leads to an unexpected consequence. He returns to a belief in goodness through the the stark juxtaposition of an ostensibly meaningless, nihilistic universe against his own moral intuitions.

As the desert teaches men to love water, or an absence first reveals affection, there rose up against this background of the sour and the crooked some kind of vision of the sweet and the straight. Something else—something he vaguely called the “Normal”—apparently existed. He had never thought about it before. But there it was—solid, massive, with a shape of its own, almost like something you could touch, or eat, or fall in love with. It was all mixed up with Jane and fried eggs and soap and sunlight and the rooks cawing at Cure Hardy and the thought that, somewhere outside, daylight was going on at that moment.

Chesterton said of course that fairy stories “make rivers run with wine only to make us remember, for one wild moment, that they run with water.” The ordinary is a miracle! Chesterton too is an exact antithesis to Lovecraft: where he finds the hidden evil and meaninglessness in good things, Chesterton, in reading a horror story, would use it as Lewis does–to find the implicit goodness that, were it absent, would make these evil things fail to terrify. The shadow actually makes the light stand out more strongly and can lead a person to faith, in the right circumstances. So it’s quite possible that in reading Lovecraftian atheistic fiction, a person could perhaps be increasingly struck by the bravery of the heroes and see in fact that this bravery is ultimately irrational unless there is some sort of a moral order to the universe. But the heroic impulse is hard to tamp down. We could see that Lovecraft might actually serve some sort of a reverse apologetic purpose.

Read this short essay by Chesterton (titled “The Nightmare”) and keep Lovecraft in mind.

Too Many Books and Never Enough

A blog for fans of J.R.R. Tolkien, from complete beginners to avid enthusiasts, exploring the author's imaginary world, influential writing and cinematic adaptations.

Comments on the New Testament and Early Christianity (and related matters)